West Mifflin, Allegheny County – On Thursday February 8, 2018 at 8:12pm, West Mifflin Police responded to the 4700 block of Coal Road for a reported Man shot with a sustained head wound.

Officers and our Emergency Medical Service responded to the scene where the victim was located. The person responsible had already left the scene.  The victim was stabilized and gave an on scene statement that he was shot by a person know to him as William Brown.  Upon evaluation at the medical facility it was determined that the victim had not been injured from a bullet wound, but had sustained a serious head injury as a result of the incident.

From information obtained from the victim it appears that an altercation occurred as a result of a mutual paramour of both the victim and William Brown.

An arrest warrant has been obtained for William Brown a 20 year old white male from West Mifflin for Aggravated Assault, Robbery, Recklessly Endangering another Person, and Criminal Conspiracy. 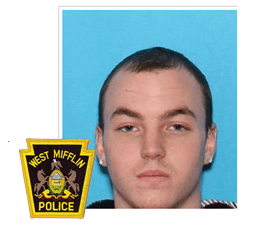 West Mifflin Police are continuing the investigation and are collecting additional evidence and may be charging an additional male as well.